Pulseaudio Parametric Equalizer is a python GUI to insert a fully parametric three band equalizer with high and low shelves into the pulseaudio audio server.

I mainly wrote this being inspired by the existing project pulseaudio-euqalizer. I was in need of a fully parametric EQ for proper speaker response equalization though and so I wrote whis application.

The program is written in python3 and uses QT5 to draw it's UI. The actual sound processing is done by insering a LADSPA-plugin into the pluseaudio chain. The LADSPA-plugin used is also written by me and can be found here: ladspa-t5-plugins. The implementation of ladspa-t5-plugins has an interesting detail: it exposes the filter parameters in a shared memory segment so Pulseaudio Parametric Equalizer can modifiy these parameters on the fly which would not be possible otherwise as pulseaudio does not expose an API for changing LADSPA parameters of an inserted ladspa-sink after insertion. 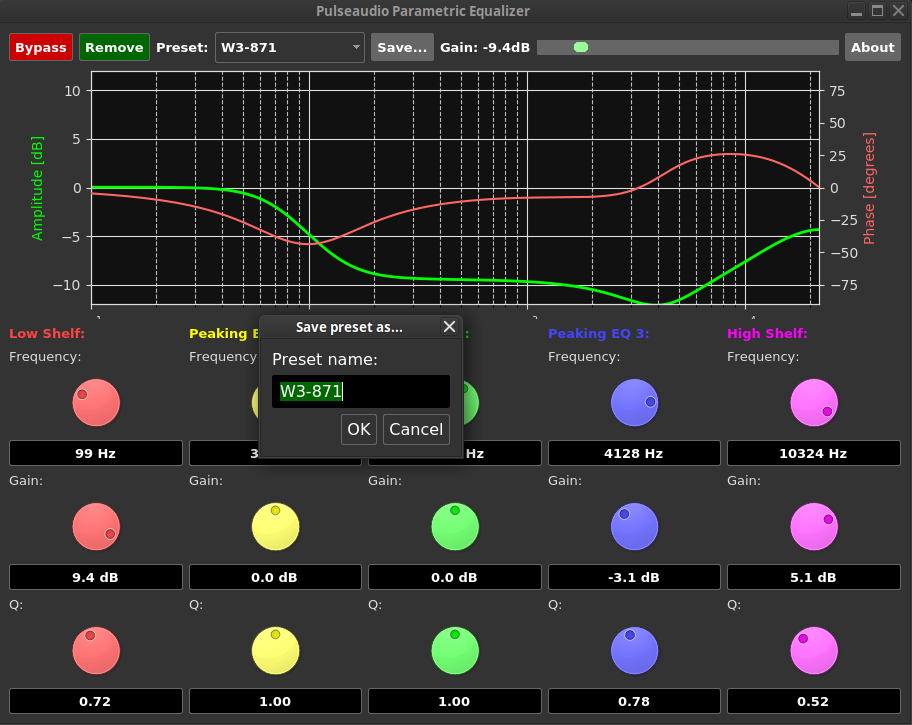 From my debian repository:

The easiest way to install pulseaudio-parametric-eq if you're on an ubuntu based system (Linux Mint for example) is to use my debian repository. Please follow the instructions to set up the apt sources files there...

After that, to install pulseaudio-parametric-eq simply use the command

The sources can be found in the GitLab repository.

To install dependencies on a debian-based system, issue the following command:

There's also a dependency on qt5_t5darkstyle, which can be installed via pip:

The GitLab repository contains an issue tracker. Please kindly use that or use the Contact page.